A sermon preached at Sunday's Patronal Festival St Mary’s. In part revisiting reflections on the Magnificat in a different context - how her song becomes our song. The texts were: Isaiah 61.10 - 11; Galatians 4.4 - 7; Luke 1.46 - 55

‘That human beings have rights; that they are born equal; that they are owed sustenance, and shelter and refuge from persecution: these were never self-evident truths’.

So writes Tom Holland, the award-winning historian, biographer and broadcaster in an essay [in the New Statesman] entitled: ‘Why even atheists think like Christians’

His point is that Christian concepts and assumptions saturate the western world. In his typically epic style, Holland traces this from the Venerable Bede to Corbin via Marx, Churchill and many others. 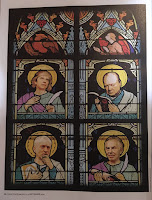 The conviction that all peoples have a duty of charity towards each other is socially transformative, is bound up with the vision of Genesis that human beings have a common origin.

We have to regularly recalibrate or reclaim the lived truth of that narrative - especially when Christianity itself is co-opted in political or social agenda that seeks to diminish the weak or serve only the strong.

Campaigns to end discrimination flow from a presumption that we all possess inherent worth. Holland the historian turns to Paul the Apostle, saying: ‘the knowledge of what constituted a just society was written not with ink but with the Spirit of the Living God, not on tables of stone but on tablets of human hearts’.

One such human heart is that of Mary. The Spirit of the Living God infuse her song; her words saturate our world. 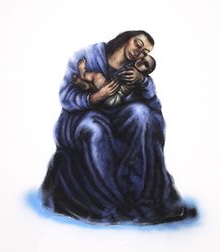 Today we are drawn into a moment of rejoicing and song.

It’s a moment which flows from the intimacy of Marys’s response to the message of an angel.

It’s a moment which reflects the hopes and promises of all the ages.

Mary’s song is first heard by an expectant older mother, Elizabeth: it’s an intimate moment of greeting and blessing, of recognition and joy.

Mary’s song echos through the generations bearing us up with our own cries of hope and protest, praise and delight.

Mary journeyed from Nazareth to the remote hill country to give and receive kindness and affection. These woman in their first and second trimesters, share the same hopes and anxieties; the same physical changes and sensations of pregnancy. And in the midst of the expected gift of life, there is immense delight, excitement and energy.

There is awe and wonder, joy and dignity. The name of their Lord is on Mary’s lips; promises of God are being fulfilled.  Words of praise and gratitude overflow into a song of hope and radical change.

We make her declaring our own as we sing or say the Magnificat: Mary gives thanks for what God has done for her and she expresses God’s generosity towards her.

She goes on to draw out the consequences for the world. The one whose name is holy will make known mercy from one generation to another. And mercy is revealed in deliverance from poverty, exploitation and domination.

Mary - this determined, trusting, courageous and joyful woman - makes the voice of the prophets her own. The poor are lifted up and the rich sent away empty; the hungry are filled with good things and the powerful are brought down.

Her song is a powerful declaration of what salvation looks like: relationships are transformed, imaginations are renewed and resources are redeployed.  This song calls us to embody the compassion and justice of God; the flourishing of the whole of creation is a promised fulfilled in the pursuit of equity.

We are to make Mary’s song our own - committing ourselves to feed the world and banish fear; embracing the lonely, vulnerable and fearful; challenging those gifted with economic and social capital.

The prophet Isaiah has steer words to say to those in positions of authority: denounced their lies and superficial religion; he challenged the abuse of power and the exploitation of the poor.  He looked forward to a time of peace - when we could set aside our reliance on military might and the false gods of wealth.

Isaiah isn’t all doom and gloom: he looked forward to a day of rejoicing and righteousness and praise.

In the passage we hear this morning, that this work of redemption is likened to the shoots from the earth. From the smallest seeds; planted, unseen, in the womb of the earth, new life and hope springs up.

Mary praises God because in her womb God’s word is enfleshed: new life and hope will be brought forth. From this small place their will be righteousness for all nations.

In the fullness of time, God’s Son is sent, born of a woman.

Redemption breaks in in the cries of an infant; in a babe at his mother’s breast.

A Son is born under the law so that we might know adoption and grace.

Blessing is found in the fruit of Mary’s womb.

We are blessed by God’s love dwelling with us in flesh of our flesh.

Blessing is found in the Son who makes us all children.

We bless as we come receptive to the gift of the Spirit, crying in our hearts.

A cry that is a channel of love.

Mary’s song rejoices that her body will birth the love of God in a tiny child; perhaps tinged with the fear that a sword will piece her soul too.

Her cry speaks of the power of God to raise up the powerless, isolated and exploited.

That power is made perfect in the weakness of human flesh: birthed and fed; teaching and healing; celebrating and rebuking; dying and rising.

That power breaks through in us too: as we break bread, we do this in remembrance of our living Lord; and the Spirit’s power enables us to change the world for the better.

Our world cries out: for that gift of peace and love: a world where fires rage in the Amazon and sea birds swallow plastic; a world of zero hours contracts and food banks; a world of the homeless and refugees.

Cries are heard:
Her name is Yvette Abaka: a 50 year old mother of two. She has witnessed six years of war in the Central African Republic. NGO funding helped her and other women to start a bakery;  These breadwinners have created small, vibrant economic networks, bringing divided communities together.

Our world cries out:
His name was Perry Jordan Brammer: aged 15, stabbed on Willan Road Tottenham on 30th August. Members of the public who witnessed the attack gave him first aid. As he fought for his life. He died a week later.

Cries are heard: when groups such as London Citizens prioritise personal relationships; when institutions work together to work for the common good. Listening to listening to communities; combating knife crime, improving mental health and campaigning for the living wage.

Like Mary, we sing songs of praise and protest, hope and vision. We make her joyful song about God’s with boldness and tenacity.

We respond to cries: singing increases our capacity to act; the Spirit strengthens us to seek justice, compassion and peace. We commit to Mary’s manifesto of struggle and change with hope and courage.

Some truths aren’t self-evident. They are written with the Spirit of the Living God; written on human hearts formed within Christ’s body.

The body Mary carries in her body is God with us. That body will teach and heal, console and provoke. That body will be beaten, mocked and lifted up on a cross. That dying body destroys death and brings new life. In broken bread, we are fed, restored and strengthened by his body; we become his body, receiving dignity and purpose.

We sing out in places of vulnerability and fear; we stand in solidarity with suffering and anxious. As his body we cry out for those seeking healing and hope; we act of those seeking justice and peace. May our lives be blessings of love.

The musings of a priest/theologian who makes time for art, novels, film, politics and good coffee